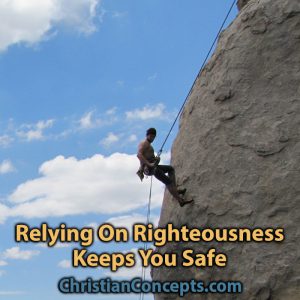 Are you the kind of person that learns the hard way or the easy way? Do you rely on your own effort or God’s effort? God’s righteousness will keep you safe. Self-reliance won’t. Developing a relationship with God is to experience eternal life.

If we are to trust in God’s righteousness, does this mean we can sin all we want without consequence? I’ve encountered some people who believe such grace is cheap. They argue that the certainty of salvation removes the incentive to stop sinning. They believe it is possible to lose salvation. The fear of losing salvation becomes the incentive to keep people from perpetual sin. Rules and consequences keep a person honest, they say.

But there is a better way to live. To feel at peace, remove your reliance on these three roadblocks: resources, responsibility, and restlessness.

Rely on Righteousness over Resources

The need for fear in a relationship with God works against the need to trust God for the security of your life. Love is a far superior motivator than fear. Love produces trust. Fear produces doubt and distance.

The distance grows as people flee the demands of obedience. The fear breeds self-reliance. Then people want freedom on their own terms. They want God’s provision but not God. They quickly receive any gift but lack respect for the giver.

The need to have resources stockpiled with no strings attached is really avoiding the fear of trusting God for your salvation. But resources bring a false sense of security at best (Luke 12:13-21).

Being responsible for your own load is a mark of maturity. The young son in the story of the prodigal son (Luke 15) learned this lesson well when he was willing to work as a hired hand for his father. He understood he had taken advantage of his father and wanted to repay his father. Fortunately for him (and you and I), his father confirmed his unconditional love for the younger son. He allowed him back without demanding repayment.

Rely on Righteousness Over Responsibility

Relying on someone else to meet your needs can be a humbling experience. Some people panic when they have nothing to do but rest. They feel their life is pointless if they aren’t carrying their own weight. They require having a fear of failure hanging over their heads because it drives them forward. They need to earn their passage in life. They resist accepting any gift.

In Luke 15, the older son was responsible (“I’ve never disobeyed you”) but he lacked the humility to receive the father’s invitation. The older son wanted to continue to rely on self-effort. The younger son, when he left his father, wanted to rely on self-indulgence. When the resources ran out, he switched to self-effort (“Make me hired hand”), but quickly accepted his father’s correction; he accepted the ring of sonship and the invitation to the feast.

Rely on Righteousness Over Restlessness

So long as you’re depending upon God’s righteousness, you can be sure of your salvation. Eternal security depends on the faith, trust, and hope you place in God. Those who worry about losing their salvation are stuck in a moment of time. They refuse to walk the path that increases their reliance on God. They can feel no hope because they are focused on fear rather than on God.

Years ago I went repelling for the first time. Somehow I intuitively understood that to descend to the bottom, I had to lean all the way out from the edge of the cliff. Without a rope and a secure anchor, this would result in a much faster (and deadly) descent. But trusting in the anchor and leaning all the way out made for a pleasant, peaceful descent.

The same is true for your life as a Christian. You must put all your trust in your connection to God to experience a peace that surpasses understanding.

Do not be anxious about anything, but in everything by prayer and supplication with thanksgiving let your requests be made known to God. And the peace of God, which surpasses all understanding, will guard your hearts and your minds in Christ Jesus.