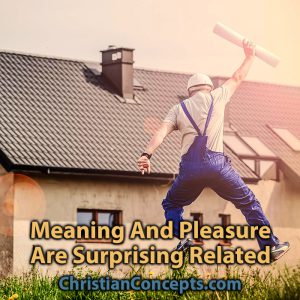 Something is meaningful if it has enough depth to last beyond the present moment. A mosquito might buzz by your ear. Then it’s forgotten. But if a butterfly lands on your arm, pauses, and then flies away, that is more remarkable. What you remember is certainly meaningful to you.

If you spend your whole life working, you might accomplish something at first, but it won’t be sustainable. All work and no play is dehumanizing. We aren’t machines.

Meaning also comes from recognizing that God is in control. He is the one flying the plane. He is the one keeping it in the air. We are passengers. But this doesn’t mean we should be passive. Meaning comes from what you can contribute, up to a point.

Unless the Lord builds the house,
the builders labor in vain.

God’s definition of pleasure is different than the world’s. The world defines pleasure as feeling good in the moment. It’s the opposite of meaningful. Worldly pleasure is quickly forgotten. God-created pleasure is also inspirational and hopeful.

If you spend your whole life seeking worldly pleasure, you might have fun at first, but it won’t be sustainable. Consuming without contributing doesn’t remain fun for long. Fun for fun’s sake lacks depth. A life without meaning will be empty.

Enjoying life in God’s way adds meaning. It reminds us that life is worth living. That’s priceless. There are times when there is nothing left to do… when additional efforts don’t help. In those moments, the best we can do is trust God to handle life’s challenges and find ways to continue enjoying life.

Working hard to know God and carry out the part of His plan that He has delegated to us is a pleasurable activity. Nothing is more meaningful than playing a part in fulfilling God’s plans.

Enhance Meaning by Resting and Trusting in God

What makes life worth living? Knowing you have significance is near the top of the list. What you do matters. But it’s more than that. What happens to you also matters. God cares about what happens to us. To think He doesn’t is to give up all hope.

Both work and pleasure are meaningless unless they are first inspired by God. The combined efforts of God and believers are a true accomplishment (John 4:30-34).

A person can do nothing better than to eat and drink and find satisfaction in their own toil. This too, I see, is from the hand of God, for without him, who can eat or find enjoyment?

We can’t make anything last beyond this moment without God (John 15:5). Enjoying your work is also impossible without God.

I know that there is nothing better for people than to be happy and to do good while they live. That each of them may eat and drink, and find satisfaction in all their toil—this is the gift of God. I know that everything God does will endure forever; nothing can be added to it and nothing taken from it. God does it so that people will fear him.

Relying too much on ability and too little on God can shift your ability from a strength to a weakness. If you want to enter into God’s rest, then don’t push yourself to accomplish more than your Maker intends. Work hard. Stress less. Enjoy life. Leave the rest to God.

More about working hard and enjoying life.
Image by Michal Jarmoluk from Pixabay 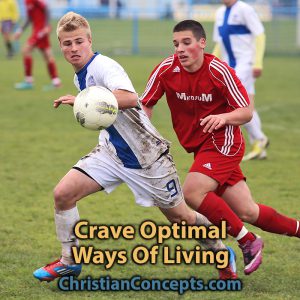 O God, I beg two favors from you;
let me have them before I die.
First, help me never to tell a lie.
Second, give me neither poverty nor riches!
Give me just enough to satisfy my needs.
For if I grow rich, I may deny you and say, “Who is the Lord?”
And if I am too poor, I may steal and thus insult God’s holy name.

Optimal Living: Not Too Low

No one craves to be poor or depressed. But some people choose to default to an understimulating life. They’ve given up on trying to make life more interesting. Having too little to do leads to boredom. People who feel bored feel useless. They lack a sense of purpose.

A hard worker has plenty of food,
but a person who chases fantasies has no sense.

People who chase fantasies or retire early only to pursue self-indulgence have lost their lives. They are missing out on the abundant life God has for them (Matthew 10:39).

God has a plan for every person. Every believer has something to contribute to God’s plan to grow and strengthen His kingdom. If believers are bored, it’s because they are ignoring God’s call on their lives.

Optimal Living: Not Too High

If you won the lottery, you probably wouldn’t voluntarily give the money back. But sometimes too much of a good thing is dangerous.

For the love of money is the root of all kinds of evil. And some people, craving money, have wandered from the true faith and pierced themselves with many sorrows.

Having too much can be a massive distraction. If people are preoccupied with money, they can’t be focused on God.

The same applies to people who are too stressed. Too many earthly responsibilities can distract a person from pursuing God’s kingdom.

People who experience the optimal life have found the sweet spot between those extremes. To produce the maximum amount of enjoyment, tasks need to be, on average, challenging enough for us to wonder if we’re going to complete them, but not so challenging that we become convinced we will never be able to complete them.

God made you in such a way that you are healthiest and happiest when you desire to accomplish something that is somewhat of a stretch for you. This applies not only to work but also to play.

Soccer wouldn’t be much fun for the players or spectators if every shot went in. Where is the fun in that? It’s not exciting. Likewise, if no shot ever went in, what would be the point? After a predictable pattern emerged, no one would want to play (ever).

A mixture of unpredictability along with possibility maximizes life satisfaction.

If you think about it, that presents a clear picture of who God is. God is unpredictable but also full of potential. Whether we are in this life or the next, we can always look to God with wonder. What will we learn about Him next? What is He going to do next?

Life won’t be boring or overwhelming in heaven, it will be optimal. 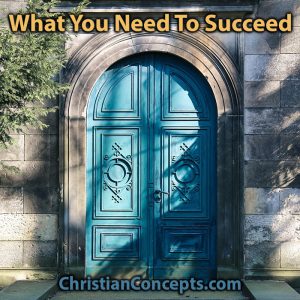 Do you have what you need to succeed in life? This question is similar to, “How are you?” It’s easy to give simple, “I’m fine” or “Sure, I have what I need” answers. But what if I really wanted to know and you took the time to give a sincere answer?

What is required for your success? This might be a tricky question to answer for several reasons:

God Wants You to Ask for What You Need

God is always looking for ways to redeem His people. When Adam and Eve felt shame for the first time, God developed short-term and long-term plans to help them succeed. Ultimately He fulfilled His own laws for us so that we can live without the shame of failure (1 Peter 2:24). But He also immediately provided clothing for Adam and Eve.

Even though everyone between Adam and those alive today has suffered, God hasn’t stopped taking care of us. He instructs us to ask Him for good gifts. What you need is nutritious for you, so it’s worth asking for it.

“Ask and it will be given to you; seek and you will find; knock and the door will be opened to you. For everyone who asks receives; the one who seeks finds; and to the one who knocks, the door will be opened. “Which of you, if your son asks for bread, will give him a stone? Or if he asks for a fish, will give him a snake? If you, then, though you are evil, know how to give good gifts to your children, how much more will your Father in heaven give good gifts to those who ask him!

Asking and Receiving What You Need isn’t Selfish

When you consider what you need, it might stir up feelings of shame. Am I worthy of being cared for? I’m so insignificant. Why would God bother to love me? My needs aren’t important. I have nothing to offer God in return. I’ve gone my whole life without my desires being met; why would anything change now? I don’t know what I need.

All of these thoughts can be summarized as “I doubt my needs will ever be met.” This belief can develop from years of disappointment. Then, it’s possible to “forget” what your needs are or that you even have them.

What if God asked you how you were doing? You might wonder if God really cares. You might think that He wants you to give a quick and cheerful response like “I’m totally blessed! I already have everything I could ever wish for.” Unless you are feeling completely content, it’s not an honest answer.

How can you become more aware of what you need?

What would feed your soul so that you have the energy to enjoy life and help others? What would be so awesome to have that it would seem unbelievable if God gave it to you? If you are struggling to answer questions like these, try some of the following:

For all of these, state your answer in terms of yourself, not other people. Don’t conclude, “I wouldn’t be angry if you didn’t yell at me.” Instead, try “I need to believe I am valuable.”

Then, the next step is to share your needs with the people in your life.

Read more about neediness.
Image by seth0s from Pixabay