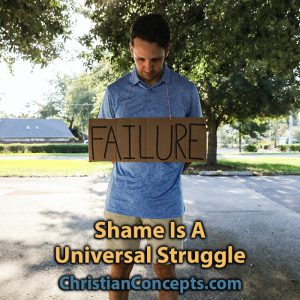 Shame is a feeling that everyone has to contend with. It’s universally inescapable. You might think that shame is spread from person to person like a disease. Actually, all of us are born with the inevitability to feel shame.

Shame is there, buried deep within us. It’s buried because we’d rather not feel it. It’d deep because it’s been with us from day one. On our best days, we can keep our heads above the water. At times we don’t feel it, but other times we are completely immersed, terrified of drowning in it. This sense of defectiveness infects a person to their core.

Many people confuse guilt and shame, so let’s look at both so you can work on experiencing more freedom.

Guilt is Feeling a Failure of Doing

If you feel bad because of something you did or didn’t do, then you are feeling guilty. There is also “true” guilt and “false” guilt. If there is nothing wrong with what you did, but you feel guilty anyway, that’s false guilt.

If you have done something wrong, God would have you feel a conviction that drives you to repentance and to seek forgiveness from Him. Conviction is different than guilt. Conviction points to a positive restoration. Guilt points to a negative condemnation.

For the Christian who trusts in Jesus’s sacrifice, guilt is no longer necessary. The law’s purpose is to increase awareness of sin, but the law cannot save you from guilt. Sacrifices were only a temporary measure that could not permanently remove guilt.

Now we know that whatever the law says, it says to those who are under the law, so that every mouth may be silenced and the whole world held accountable to God. Therefore no one will be declared righteous in God’s sight by the works of the law; rather, through the law we become conscious of our sin.

The law is only a shadow of the good things that are coming—not the realities themselves. For this reason it can never, by the same sacrifices repeated endlessly year after year, make perfect those who draw near to worship. Otherwise, would they not have stopped being offered? For the worshipers would have been cleansed once for all, and would no longer have felt guilty for their sins.

But Jesus’s sacrifice has the power to remove guilt forever. God intends that you believe the following about yourself:

For by one sacrifice [Jesus] has made perfect forever those who are being made holy.

And where [sins] have been forgiven, sacrifice for sin is no longer necessary.

…let us draw near to God with a sincere heart and with the full assurance that faith brings, having our hearts sprinkled to cleanse us from a guilty conscience and having our bodies washed with pure water.

Shame is Feeling a Failure of Being

If guilt isn’t enough then there is also shame: that sickening feeling that results simply from existing. Shame results not from what you’ve done, but from how you feel about being you. The context of shame is always other people, how they must view you. Someone feeling shame desperately wants what is impossible: to remove and discard more of who they are.

When Adam and Eve were “naked and felt no shame,” this means they felt no embarrassment for who they were and what they desired (Genesis 2:25). They accepted how God made them without any concern.

Consider who you are and what you feel ashamed of about yourself. That part of you that you believe is defective, dirty, incompetent, unwanted, inadequate, or bad is what God says is good. He made you the way you are on purpose. After your sin is removed (which has already been done) all that remains is everything you are supposed to be.

I pray you are able to rest more and more in this truth that you are loved and accepted.

Steps to Overcoming Shame.
Photo by Mick Haupt on Unsplash