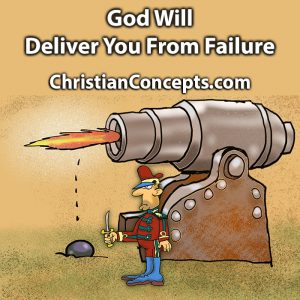 How often do you feel discouraged by some kind of failure? If you think you’ve failed, you might say something like:

To believe any of these statements, you must be deceived. Every one of them has something false about it.

A worldly definition of failure has four parts:

In fact, what makes failure so hideous is not so much the first three, but that last one. The lingering feelings of self-condemnation and self-loathing are unbearable and there appears to be no escape from them.

Sin is probably the best definition of failure. It completely misses what God wants for your life. Without God, you are defective because of sin. But God has stripped sin of its power. So it does not have a significant lasting effect.

Failure implies some kind of ending. But because God is an eternal being, endings do not exist for Him. Any moment in time is not the final word on your situation.

You can always learn from your experience, even if it seems like an abysmal failure. God is ready to give you another chance. You can start again in a stronger position.

I sought the Lord, and he answered me; he delivered me from all my fears. Those who look to him are radiant; their faces are never covered with shame. This poor man called, and the Lord heard him; he saved him out of all his troubles. The angel of the Lord encamps around those who fear him, and he delivers them.

Image by mojo49 from Pixabay