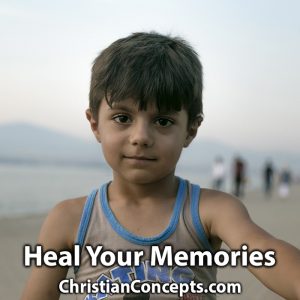 Wouldn’t it be nice to heal without having to relive painful memories? Unfortunately, to heal a memory, it’s necessary to face it directly. You can’t change a memory, but you can change how you see it. How you interpret life events that can create serious emotional problems. Healing a memory involves changing its meaning from negative to positive.

Part of healing is learning from what happened. The re-interpreting is the learning. Therefore, remembering is essential to healing. So, it’s not a good idea to zap yourself or hit your head until you forget an awful memory.

To change a memory’s interpretation you must appeal to a higher authority than you looked to when you created the memory. Even the determination of which authority is higher is subjective. Some people look to harmful or even evil people as their authority. As Christians, we know God is the ultimate authority, but we also know our sin within can deceive us.

This is part 2 of Sean’s healing journey.

Sean entered into a negative cycle that seriously picked up steam during his high school years. He continued to act out in high school. Once the victim, he now became the bully. When anyone taunted him, he fought back swiftly. He hunted down those who harmed him, including those that he hadn’t spoken to in years.

One day though, Sean started feeling different. After another fight, a girl from his class spoke kindly to him, “You’re so angry. You must be really hurt inside.” He started feeling a twinge of guilt whenever he saw the hurt on his victim’s face. He remembered how sad he felt before he allowed anger to consume him. Sean didn’t understand why he was changing. God was about to draw him into a much-needed healing process.

Sean began to realize how his behavior was hurtful and pointless. What did it accomplish? No matter how many fights he got into, he still felt miserable. He made a commitment to stop mistreating others and himself. At first, this was difficult and he had mixed results. He stopped picking fights but found it more difficult to stop his binge eating.

When Sean was twenty years old, God led him through some specific memories. Sean revisited his experience of losing his bicycle at 7 years old. He felt the pain of loss like he never had before. This was actually the first time he allowed himself the luxury of grieving his loss.

Sean realized for the first time that he didn’t deserve his parents’ harsh response to someone stealing his bicycle. His parents didn’t give him the opportunity to correct his ways after his mistake. His life in the past thirteen years would have been very different if his parents could have restored him gently.

God lead Sean to specific scriptures that demonstrated how He offers mercy and grace along with the truth.

And the Word became flesh and dwelt among us, and we have seen his glory, glory as of the only Son from the Father, full of grace and truth.

The Lord is merciful and gracious, slow to anger and abounding in steadfast love.

Sean became involved in a small group at his church and he told them his bicycle story. God led the members of his group to come around Sean and help him see and experience God’s love. They chipped in and purchased a new (adult) bicycle for Sean. Sean used his new bicycle to get to school and work.

Part 3 of Sean’s Story explains in more detail how to heal emotional wounds.