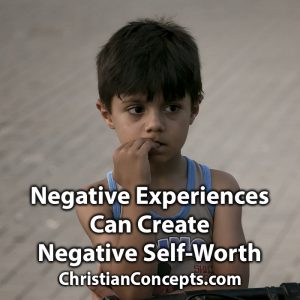 Parents are the deciding factor at a young age. If the parents are the primary influence and they’re negative, the child is often in a hopeless situation. If the negative experiences come from outside the family, then at least the parents can boost the child’s self-worth through support and encouragement.

Sean loved the red bicycle he got for his 7th birthday. Red is his favorite color. His bike wasn’t the only gift he received from his parents, but it was the only significant one that shaped his life.

He rode his bike everywhere he went in the neighborhood. He especially d to ride it to the local store where he could purchase his favorite snack and see his friends.

One day, upon exiting the store, his bike wasn’t there. He looked around hoping he had simply forgotten where he left it or someone had moved it. But it definitely wasn’t there. His knees felt weak, his stomach dropped, and he felt like he was going to puke.

Unfortunately, Sean had more to be upset about than his bike. He started walking home. The closer he got, the slower he walked. His feet wouldn’t move any faster. When he arrived home, he played outside for at least an hour, but as it got dark, he had to go in.

“Someone took my bike.”

His mom, already stressed from the day’s activities, responded in her predictable way, “What? How could you be so irresponsible? How could you… well, you’re not getting another one. Go to your room until your dad gets home.”

Sure enough, his parents punished him for being “lazy.” Not only did he have to cope with losing his bike, but he also had to endure his parent’s hot anger and being grounded for a month—a true triple-whammy. And that doesn’t include the spanking he received.

His teen years were filled with more dread. He believed he was “messed up” and carried a heavy anxious feeling with him. He frequently muttered under his breath, “yep, another perfect mess up by Sean.” His internal thoughts were the worst. “Irresponsible. Failure. Stupid.”

Sean turned to food to manage his uncomfortable feelings. “I feel better when I eat. Or, at least I don’t feel so bad.” Inevitably this led to weight gain. By the time he was 9, he had gained quite a lot of weight.

Unfortunately, this left him open to unkind words from his peers. They snickered and made funny noises behind his back and sometimes even in his face. Unfortunately, even most of his closest friends turned against him. They stopped playing with him.

The additional pain quickly became too much for Sean to manage with food alone. Sean fought back when picked on. This was only verbal jabs at first, but eventually, the depth of his pain produced a physical reaction he didn’t know how to control. He started pushing the kids who called him names. Once after school, he fought with one of the weaker ones he knew he could at least get in a few hits.

The trouble at school only made matter’s worse at home. His parents responded with more disappointment and restrictions. But the worst part for Sean was having no one to talk to about how rejected he felt.