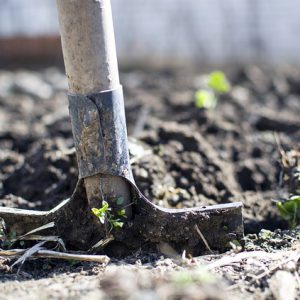 One of Aesop’s Fables, The Miser and His Gold, demonstrates that without God, the fear of not having enough is strong.

Once upon a time there was a Miser who buried his gold near a tree in his garden; but every week he used to go and dig it up and gloat over his gains. A robber, who had noticed this, went and dug up the gold and left town with it. When the Miser next came to gloat over his treasures, he found nothing but the empty hole. He tore his hair and raised such an outcry that all the neighbors came around him, and he told them how he used to come and visit his gold.

“Did you ever take any of it out?” asked one of them.

“Then come again and look at the hole,” said a neighbor; “it will do you just as much good.”

The Miser lives a stagnant, distracted life and remains empty despite having a treasure. He is mesmerized by his treasure but he only has the illusion of fullness. He has the wrong focus: external and worldly. He clings to the vain and empty. He feels anxious because he uses creation the wrong way.

Using the visible to attempt to fill the spiritual doesn’t work.

The Miser expects security from wealth when God didn’t make money for this purpose (1 Timothy 6:10). Using something the wrong way is expecting more from it that it is capable of delivering. If you put too much strain on a shovel, it will break. Or, if you put too much weight in an elevator, the cable snaps. If you expect too much from a friend, you might lose your friend.

Another story, the Parable of the Talents (Matthew 25:14–30), demonstrates that without a Confident Identity you can’t please God. In the parable, the master gives his servants talents (money) according to their ability. Two of the servants multiply their God-given resources. The master showers them with equal praise, independent of their ability. But, the master condemns the lazy servant who doesn’t attempt to use his ability. He lacks initiative because he focuses on his fear of failure. He is unable to perform because he doesn’t feel secure in his identity.

Why doesn’t the servant feel secure enough to invest? He probably didn’t take the time to pursue learning his identity with the help of others’ encouragement. The lesson for the servant might be potential that you never use might as well not exist. Those who completely avoid God out of fear demonstrate they don’t really know Him. God wants you to trust and invest. God wants you to activate what He’s given you. Your identity won’t do you any good unless you discover it and use it wisely.

Both the Miser and the lazy servant believe the wrong information about God and their own sense of self. Both are fear based and seek a false security. The Miser relies on a treasure instead of God. The servant would rather not try at all than to try and fail, even though to not try is the surest way to fail. Neither is willing to risk failure in order to live up to their potential. Both seek self-preservation apart from God.

As with many stories Jesus told in the Bible, the interpretation depends on your standing before God. When you’re in good standing already (meaning you’re a believer) the stories are meant to encourage and reassure. God wants to shower praise on you for your sincere efforts. For those who hate God and don’t know Him, the messages are extreme. They’re meant as a warning to encourage drastic action to put you in good standing.

Use it or you might lose it. Think of a gift or blessing God has given you. How can you use it today?