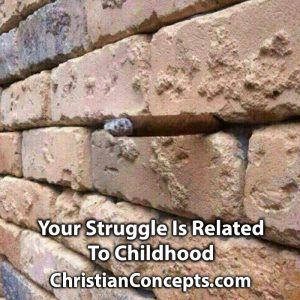 Optical illusions are fun. They work because of your assumptions about reality. To some degree, you will perceive what you want to perceive. Sometimes that aligns with reality and sometimes it doesn’t. Either way, after you see past the illusion, it’s difficult to be tricked again.

Your consciousness is similar to an optical illusion. You have meaningful events buried beneath the surface. The significant events are rich with life lessons and strong feelings. As you intentionally uncover the significance of your history, it becomes harder to ignore, unless you are determined to avoid it.

Becoming in touch with your uncomfortable memories is helpful. This can seem counter-intuitive until you realize that to not be in touch with your history is to be in denial. What is distressing tends to stay buried, unless you are determined to be healthy.

Many of your childhood struggles continue to play out in your everyday interactions. You just don’t realize it unless you look intentionally. Without some prompting, it’s easy to leave pain buried. You might think you are better off leaving sleeping giants undisturbed.

A decade or two or three isn’t enough time to fully resolve life’s challenges. Chances are, whatever you struggled with as a child, you still struggle with today. Ideally, you struggle with it to a lesser degree. But there’s no shame in noticing you continue to struggle.

Everyone has to overcome their fear of inadequacy if they want to grow. Don’t be surprised and discouraged when you experience some of the same feelings you had during your younger years. Instead, see this as a positive sign that you are strong enough to take a clear look at how you are responding to life.

How you respond reveals a lot about yourself that you need to know if you want to continue healing. This works for both positive and negative emotions.

Positive emotions can tell you what you’ll naturally be drawn to. They can get you into a trap just as easily as negative ones if you’re not vigilant. For example, a person who notices they feel great when they win might be tempted to gamble for a chance to win big.

Negative emotions tell you what you want to avoid. They become a trap when they take center stage. For example, a person who fears competition might become so consumed with failure, that they avoid trying.

Spend time noticing what makes you exceptionally happy, sad, angry, or anxious. Then make connections with your earlier experiences. What themes do you see?

For those of you who made it this far, the picture that goes with today’s post contains an optical illusion. I found it on the internet. Apparently it was popular around 2014.