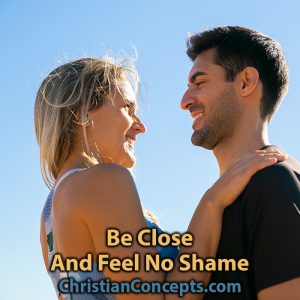 To be close to someone requires that you reveal who you are. Unfortunately, because of the fall, we can experience shame by believing that we are ugly (deformed) in some way, even though God never intended us to experience this.

Now the man and his wife were both naked, but they felt no shame.

That sums up the primary goal of marriage. Can you reveal who you are and what you really want, without hesitation or embarrassment? Can you do it with someone of the opposite sex who might not understand you so well?

You can be rejected and feel ashamed at the same time, but you don’t have to. If someone chooses to reject you, your response might range from indifference to depressed, to feeling deeply ashamed.

There’s no greater stress on your soul than feeling ashamed. To feel humiliated is to believe that your greatest desire will never be fulfilled. It happens when you honestly admit what you want more than anything while simultaneously accepting that the culmination of your desire is impossible, and therefore, something must be hopelessly wrong with who you are.

Freedom allows for longing to grow. When you have freedom, you can be aware of what you want and be allowed to pursue it.

Control is the opposite of freedom. It has to do with insecurity which can originate from the belief I am not worth being pursued. When you feel unattractive (whether by physical appearance or within your being), it’s tempting to force closeness (to prove worth) or distance (to avoid feeling worthless) in relationships.

So you can see how togetherness and separateness can be in conflict in marriage. Freedom allows your spouse to feel their desire to be with you. It allows both of you to be who God created you to be.

The desire for acceptance and the likelihood of experiencing shame promote defensiveness. But the resulting distance produces loneliness which isn’t good either (Genesis 2:18).

Love and respect affirm a person’s identity. They are the antidote to shame, so without them, shame is certain. Love and respect can’t be faked, so you must cultivate them genuinely.

Genuine togetherness occurs when both husband and wife desire to be together. You can encourage a desire for closeness by focusing on the positive qualities of both you and your spouse. You are both made in God’s image, so even when you might not be able to see positives qualities, they exist.

God didn’t make a husband and wife to be together 100% of the time. To be literally one would make the need for two obsolete. Instead, “one” means to function as one–to be on the same team. Members of a volleyball team would be much less effective if they were joined at the hip (too close) or if they played independently of each other (too separate). Their effectiveness increases as they cooperate but perform distinct functions. The strongest team will have diversified (not redundant) members who function together to achieve a purpose greater than they can achieve apart.

Marriage is more challenging than volleyball. It’s easier to be on the same team in volleyball because the skills required are fewer and simpler. The playing field is divided into two parts. The opponents are clearly visible. The objective is in plain sight.

When you lose sight of the purpose of marriage the team analogy becomes less understandable, but it’s no less valid. Conflict in marriage will increase to the degree the team objective is lost. The conflict often results from one or both people wanting too much closeness or too much separateness. A person’s expectations can become not only unhealthy but also impossible to fulfill.

Every relationship has an optimal amount of closeness which can vary depending on the season of life. Paradoxically, knowing how to be skillfully distinct (separate) allows for being the closest possible without feeling ashamed.

You can live knowing you are beautiful today for two reasons:

For these reasons, you can draw close to God without experiencing shame (Hebrews 4:16) and then also draw close as husband and wife.

For further learning, consider what is the objective of your marriage. How can you support each other on the same team? Ask God to help to see and affirm the positives in your spouse.