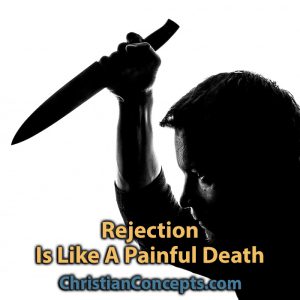 What has been your experience with rejection? I see it as the most painful experience. But God has overcome it with the power of His acceptance.

I recently watched the movie, Saving Private Ryan, again. In one scene a German and American soldier are wrestling for survival. The American pulls out a knife, but the German manages to use the knife against him. The American pushes against the German’s arm to prevent the knife from cutting into his chest, but slowly the knife moves deeper until the American dies.

In managing pain, it’s usually easier to face and get it over with quickly. A slow and painful death is bad enough. To face the humiliation of defeat and also endure excruciating torment is the worst. But isn’t this is exactly what Jesus faced on the cross? He was without personal guilt, but in carrying the weight of sin, He must have experienced the shame of our guilt.

“He himself bore our sins” in his body on the cross, so that we might die to sins and live for righteousness; “by his wounds you have been healed.”

Rejection Is a Lie From the Devil

The devil wants you to feel cut off from God. He doesn’t have the ability to sever your connection with God. The best he can do is deceive you into believing God has rejected you.

When you experience emotional rejection, there is nothing true about it. It’s not valid. If you struggle with self-doubt, you become susceptible to believing the lie is valid. You might feel horrible as if it were true. This happens when you focus on the negatives rather than on God. It often leads to God-doubt such as, “God doesn’t love me” or “I’m too defective for God to love me.”

Jesus’s sacrifice saves you from destruction. He rescued you from the darkness–including its lies and shame.

For he has rescued us from the kingdom of darkness and transferred us into the Kingdom of his dear Son, who purchased our freedom and forgave our sins.

Because of this, no matter what you’ve done, you do not have to endure any shameful rejection. Don’t do that to yourself. You can graciously accept God’s discipline but you can reject the devil’s rejection.

God Accepts You as a Friend

Do you realize that God is for you? Because of Jesus’s death, you are blameless and without a single fault.

This includes you who were once far away from God. You were his enemies, separated from him by your evil thoughts and actions. Yet now he has reconciled you to himself through the death of Christ in his physical body. As a result, he has brought you into his own presence, and you are holy and blameless as you stand before him without a single fault. But you must continue to believe this truth and stand firmly in it. Don’t drift away from the assurance you received when you heard the Good News.

Because God has removed your sin and guilt, you have His complete acceptance. Others may reject you, but God will not reject you any longer. God wants you to cling to this truth. You are a member of His family. You are God’s friend.

No longer do I call you servants, for the servant does not know what his master is doing; but I have called you friends, for all that I have heard from my Father I have made known to you.

To fully heal from rejection, you must not avoid it. Only by feeling it can you realize how false it is. The process involves staring down the lie until it is no more. Facing the lie with the truth weakens it. Even though it can be absurdly painful, the lie will die, leaving you with freedom because of Christ.

Take some time to remember when you have felt most rejected. Allow the truth of God’s acceptance to wash away the lie.

Read more about overcoming discouragement.
Image by PublicDomainPictures from Pixabay