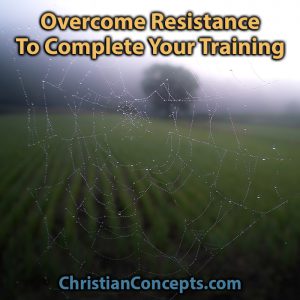 Often, life must become unmanageable or unbearable in some way before a person will be willing to seek help. There is a saying, “Only when the pain of remaining the same is worse than the pain of changing, will someone make the effort to change.”

You can let your pain build until it reaches such a critical level that you suffer a catastrophic breakdown. If you want to avoid this and move forward in your life, don’t make the following three mistakes.

When a person is in denial they will attempt to cope with their problems so they can remain self-sufficient. Coping attempts to minimize the pain instead of eliminate the pain. Most people think of a problem as a negative event, but a lack of a positive event can also be a problem.

In Star Wars, Luke’s problem was more than the fact that he wasn’t happy as a farmer. He also wasn’t happy because he wasn’t able to pursue using his gifts for an even greater good. Helping his aunt and uncle was good, but helping to destroy the death star was far better.

There is a path before each person that seems right,
but it ends in death.

Are you on a path that seems good, but it is really leading you nowhere?

Mistake #2: Fail to Overcome Resistance by Clinging to Selfish Goals

When a person believes lies (such as “I’m worthless”), they lack the insight to look beyond their own circumstances. A person who clings to their selfish goals will fail to overcome problems and will experience painful loss.

Luke wants to fight the empire but he can’t see past his obligation to help his uncle. He does what seems right until fate brings serious trouble to his doorstep.

A prudent person foresees danger and takes precautions.
The simpleton goes blindly on and suffers the consequences.

Are you pressing ahead just because you want to or because it seems to be the safest route, despite some sense of looming consequences?

The foolish person will refuse help even while they are suffering. Fear can stop many a dream from becoming reality.

Luke knows the rebels need help defeating the empire. Obi-Wan asks Luke to join him and offers to train him. Luke isn’t ready yet to leave home. He uses the excuse that he can’t get involved because he has work to do.

Fools think they know what is best,
but a sensible person listens to advice.

But when he finds that the empire is looking for his droids, he realizes that his aunt and uncle are in danger. Only when he is faced with their death does he have nothing left to prevent him from accepting Obi-Wan’s offer.

This logic might look like I’m saying that a young adult should always put their own ambitions ahead of their parent’s counsel. There might be more times that it is prudent to follow your parents. But in this case, the parents are the ones holding their child back from what is better–meaning what is better for God’s kingdom.

If you love your father or mother or even your sons and daughters more than me, you are not fit to be my disciples.

So then, consider if there is anything you are refusing to do that would benefit God’s kingdom more than what you are already doing. What help do you need to overcome your resistance and make it happen? Who has already been offering their help? Ask God for wisdom and understanding so you can see your best path forward without serious consequences, if possible.