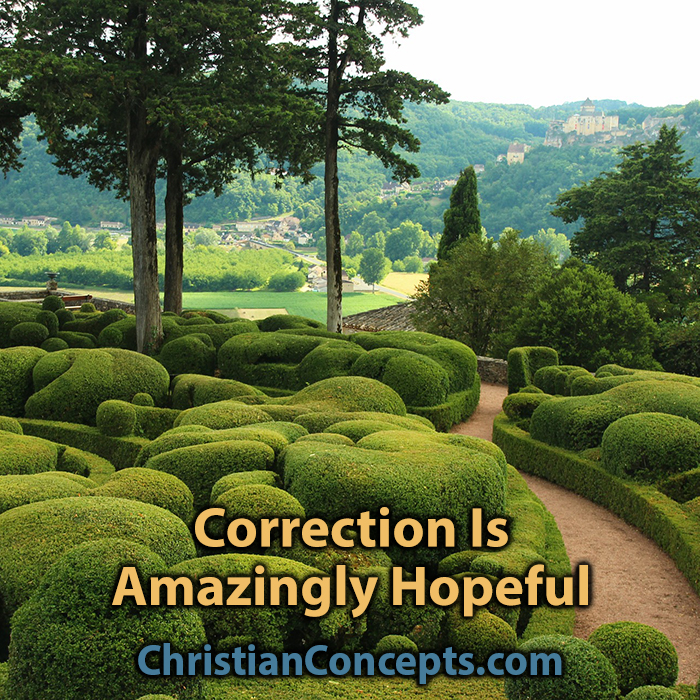 Correction isn’t possible without patience. That’s because correction focuses on what is best for people who have errored. The opposite of correction is being lenient or harsh–it’s the sweet spot between the two.

Leniency fails to provide enough (or any) correction. It’s neglectful. It’s not the same as mercy which omits any destruction but still involves whatever is best.

Harshness over-corrects. It’s abusive. It’s not the same as helpful consequences. Harshness harms the people who have errored. It weakens them, making them less likely to achieve positive results.

A natural consequence for people who drive drunk is to take away their ability to drive. They might be inconvenienced but they still have a path forward in life. A lenient response would be silence (no consequence) which is essentially the same as condoning the behavior. An extreme, harsh response might be permanent expulsion from the country.

There is never anything bad about correction. If it is on target, people can feel the consequence but can keep their dignity intact. Whatever they lose or whatever they must endure clearly points them in a direction that is only better.

Pruning is an excellent example of correction. A plant is expanding but not in ways that are healthy. It might have a disease, but it still has incredible value. Pruning reshapes the growth of the plant, making it optimal long-term.

“I am the true grapevine, and my Father is the gardener. He cuts off every branch of mine that doesn’t produce fruit, and he prunes the branches that do bear fruit so they will produce even more. You have already been pruned and purified by the message I have given you.”

Pruning (correction) brings focus. The person doing the pruning communicates, “Don’t go that way; go this way.” The person who receives correction experiences loss. It can be quite painful, but it will be short-lived if the person adopts the right perspective.

Punishment might share some things in common with correction but it’s definitely not a good substitute. The devil wants to bring about whatever will rob a person of hope. He feeds off of despair.

Punishment is more than just the delivery of hopelessness. It promotes lies. It hides the truth of the Gospel. To be discouraged, you must become blind to the truth.

Punishment decreases hope which makes life less livable. Returning to the gardening analogy, the punishment goes beyond pruning to hacking away at a plant. Instead of carefully cutting away unnecessary branches, all of the plant’s leaves might be removed. It’s not murder but the chance that the plant will die increases significantly.

How does God, our spiritual parent, relate to us? He corrects His children and He will eventually punish those who never become His children.

And have you forgotten the encouraging words God spoke to you as his children? He said,

“My child, don’t make light of the Lord’s discipline,
and don’t give up when he corrects you.
For the Lord disciplines those he loves,
and he punishes each one he accepts as his child.”

As you endure this divine discipline, remember that God is treating you as his own children. Who ever heard of a child who is never disciplined by its father? If God doesn’t discipline you as he does all of his children, it means that you are illegitimate and are not really his children at all. Since we respected our earthly fathers who disciplined us, shouldn’t we submit even more to the discipline of the Father of our spirits, and live forever?

God is love, so His correction is going to feel loving even when it is painful. Love always hopes.