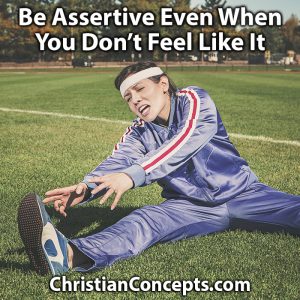 To be sure, exercise has its benefits and you can even grow to crave exercise more than your favorite TV show. But enjoying something like exercise takes time to develop. It’s worth the effort though because it’s more deeply satisfying than whatever comes too easily.

Passive = Discount You And Count Others

You might choose to be passive when you don’t care about the outcome. That’s actually being smart. You conserve energy by avoiding to make any decision.

Most of the time you’re likely to have an opinion. When you care about the outcome, but still don’t speak up regarding you preferences, you’re being passive.

Aggressive = Count You And Discount Others

You might choose to be aggressive when you care too much about the outcome. If you believe you are right and must decide immediately (such as in an emergency) then aggressive behavior might be you only option.

Most of the time forcing your choice on others isn’t optimal nor positive. When you believe you must win at all costs (or on terms others find unacceptable), you are being aggressive.

Being aggressive is more efficient than being assertive but it usually comes with consequences (whether foreseen or not). Sometimes the damage done is irreparable.

Assertive = Count You And Count Others

Assertiveness requires much more up front effort, but the end result is usually much more satisfying. That’s because there’s always some form of win-win.

People tend to choose passivity when they believe that considering their opinions, wants, or needs are selfish. But it’s not selfish to declare your desired outcome. Just because you ask for something doesn’t mean you’ll always get it. Even Jesus asked for another way out of his crucifixion before he became obedient to death. He asserted His desire but was also always ready to submit to God’s desire.

Going a little farther, he fell with his face to the ground and prayed, “My Father, if it is possible, may this cup be taken from me. Yet not as I will, but as you will.”

Do nothing out of selfish ambition or vain conceit. Rather, in humility value others above yourselves, not looking to your own interests but each of you to the interests of the others. In your relationships with one another, have the same mindset as Christ Jesus:
Who, being in very nature God,
did not consider equality with God something to be used to his own advantage;
rather, he made himself nothing
by taking the very nature of a servant,
being made in human likeness.
And being found in appearance as a man,
he humbled himself
by becoming obedient to death—
even death on a cross!

People tend to choose aggressiveness when they believe their desired outcome is more important than anyone else’s. Jesus remained assertive because He let His desired outcome be secondary to God’s. In the end, we all won our freedom because of Jesus. And, He won too because God glorified Him.

Read more about selfishness.
Image by Ryan McGuire from Pixabay