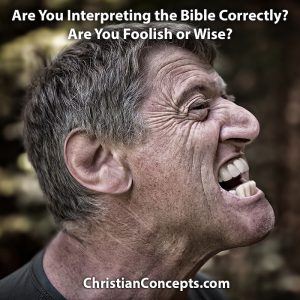 A casual reading of the Bible can lead you in the wrong direction. Sometimes the consequences can be trivial, but at other times they can be severe.

Any contemporary Bible version is a translation from the original text (usually in Hebrew or Greek). A translator must interpret the source language to determine what is the best word choice in the destination language.

To better understand a passage, it’s helpful to read multiple versions of a passage in context. Ask, “what meaning did the original author intend?” Sometimes, it’s not so obvious. But we have the Holy Spirit to help us gain the best meaning. We also have each other as believers to help with understanding.

Proverbs 18:2 isn’t too complicated, so it’s an easy place to start. Consider how the meaning becomes more clear by reading multiple versions.

Fools find no pleasure in understanding
but delight in airing their own opinions.

Fools have no desire to learn;
they would much rather
give their own opinion.

So far we can see that “understanding” and “to learn” can be substituted for each other. That’s not too profound, but let’s look at two more.

A fool does not care whether he understands a thing or not; all he wants to do is show how smart he is.

Senseless people find no pleasure in acquiring true wisdom,
for all they want to do is impress you with what they know.

With these next two, we get a couple of new phrases. I like how the GNT shows the idea of not caring about understanding which allows hasty actions and a lack of patience. We also learn that a fool is senseless.

A rebel doesn’t care about the facts. All he wants to do is yell.

The last one (TLB) is more of a paraphrase translation. But can’t you just picture someone airing their opinions by yelling? You can imagine the fool in action. This gives me a picture of someone who doesn’t necessarily make sense, but who probably believes that whoever is louder is more right. Verse 1 supports that idea.

People who do not get along with others are interested only in themselves; they will disagree with what everyone else knows is right.

So, fools will stick to their folly even in the face of mounting evidence against them (see also Proverbs 23:9 and 26:4).

Proverbs 18:1 is more complicated than verse 2. In fact, based on some commentary I read on BibleHub.com and BibleGateway.com, it’s possible to interpret verse 1 as encouragement to separate from others.

And, if you believe or know by the Holy Spirit that you have found the truth, then you should stubbornly hold to your convictions, even in the face of many dissenters (see Romans 16:17-18).

However, the positive interpretation is wrong if you stubbornly hold to a false belief. A fool will place his own opinion above the truth. A fool doesn’t really care about truth. Most commentaries agree that Proverbs 18:1 is interpreted correctly as a warning to not find yourself in the wrong camp, rather than (in this context) as an encouragement to defend your opinions.

Next week, I’ll continue to explore this idea with verses 3 and 4.