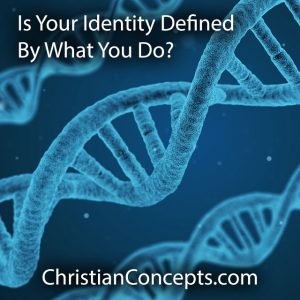 Identity can’t be defined by what you do. It’s the other way around: what you do flows out of who you are.

The two are correlated though. What you do provides clues about who you are. But you are always more than what you do. And, in the case of a mistake, one moment in life doesn’t have the power to immortalize you.

At the moment you came into existence, you have your identity. It serves as a map like your DNA. Life experiences are like sonar waves going out to detect your identity. Even what you do can be like identifying waves. Sometimes those waves contain distortions and you might get the wrong impression of who you are.

Your self-image is your best estimate of who you are. Your self-image is a limited, distorted version of your true identity. You limp along in life to some degree because you don’t know what it’s like to be completely free from the distortions. You can’t know, at least not in this life.

You can change your self-image to move into alignment with your identity. But your identity is fixed and unchanging for all time. That should be reassuring. You’re not aiming for at a moving target. You can become more aware of who you are.

Your identity is defined by your creator. If you want to know who you are, you need to ask God. So in this sense, who you are is somewhat of a mystery. Only God knows your identity completely.

Some people try to wrest control of their identity from their creator. “I’ll define myself my own way apart from God. I’ll manipulate my physical appearance, my body, and maybe even my DNA.” But this is only a superficial change compared to the identity God created for you.

You can observe your identity by looking at how you react to life experiences. You can also define it based on the truth found in the Bible. For example:

And there are many other defining statements in the Bible. Some of the definitions apply to everyone (everyone is made in God’s image), and some apply only to those who have become believers in Jesus Christ (Christians have a renewed spiritual connection with God and experience His love in a more intimate way – see 2 Corinthians 5:17 and Romans 5:5).

Then there are the specifics that only apply to each individual. You are unique. No one else has the same combination of abilities and perspective on life. You see God in a way that others need to hear. Your voice and contributions are needed – otherwise, God wouldn’t have bothered to create you. You are significant.

To define the specifics, you can look at your:

When you start to notice the patterns in all of these, you will have a stronger sense of your identity.

As you seek your identity, remember that you aren’t self-sustaining. You can’t keep yourself alive forever. You have a distorted self-image. You need to look beyond yourself to find your identity. You are defined by your context; God is where you came from, and if you’re a believer, God is where you will return.

How are you doing with discovering your true identity? What struggles or obstacles are preventing you from realizing all God made you to be?

I posted this answer on Quora for the questions: Is our identity defined by what we do? If not, what is it defined by? If you like my answer, upvote it on Quora.

Image by Arek Socha from Pixabay 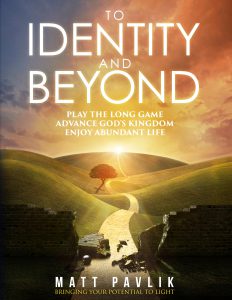 Matt’s third book is now available for purchase. If you struggle to know the importance of your God-given identity, To Identity and Beyond is a must read. 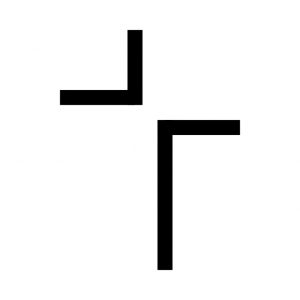 I recently came across a cross. Or what someone told me was a cross.

As far as I know, the artwork was done with the right heart. The inscription said something like, “God told me to leave the cross open.”

What does this picture of an “open cross” mean to you? On a positive side, it could mean that the cross is open to all. And if that means all who want to develop a relationship with God can repent and accept Jesus’s death and resurrection, I’m all for it. God’s invitation is open to all.

Being a mostly organized person I appreciate order. Most of the time my desires aren’t pathological like Monk (the Obsessive Compulsive Detective). I like symmetry. I also like abstract and symbolic art.

But for some reason, I find this depiction of the cross to be… disturbing. It feels like an attempt to be modern gone bad. It crosses over into something new age. It waters down the truth. It makes the work of Jesus look incomplete and… cheap.

In fact, the more I looked at it, the more I felt uneasy. I see a swastika, not a cross. But apparently, the swastika is a cross of sorts — a hooked cross. To some cultures, it has a positive connotation but to others, it is associated with terror (according to https://en.wikipedia.org/wiki/Swastika).

So, maybe this is a psychological test — a Rorschach of sorts.

What does my interpretation say about me? I’m more of a purist when it comes to truth. I look for the simple truth and become uneasy with trying to dress it up too much.

I like that God made men and women different with distinct preferences. I see consistency and meaning in gender. The physical appearance of our bodies is representative of the underlying spirit and personality God gives us. For more on gender see https://christianconcepts.com/why-gender-is-binary.

Here’s my attempt at an open cross. 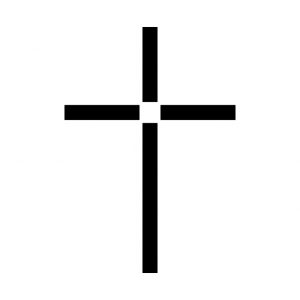 I’m not saying this discussion is a matter of right or wrong. But for my own sense of peace and order, the first cross just… crosses a line for me.

What do you see and how do you feel about the first cross? 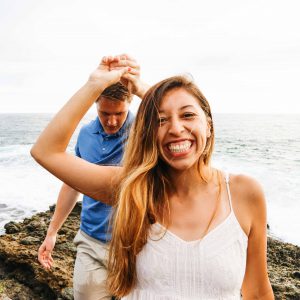